Right.  I have directed my impotent rage at this many times before, but seriously, this saying makes absolutely no sense;


Why? Why?  What other reason would one 'have' a cake without the intent of consuming it?  Cake is something not widely known for it's versatility of uses.  Yes, before anyone starts, I know the message this saying is meant to convey (before anyone gets all tetchy) but if you think about it . . . I'm 100% right and it makes absolutely no sense whatsoever.

Oh I get it . . . this is all because I rage-quit blogging just like I do when I fail both miserably and frequently on Black Ops, isn't it? But I did say that my last one was 'likely' to be my last ever blog . . . but wasn't.  Before I continue waffling on, I'd also like to highlight that in my last one I declared an end to the six-month single challenge, so technically I haven't failed on either of these accounts.

I AM NO LONGER FOREVERALONE.JPEG 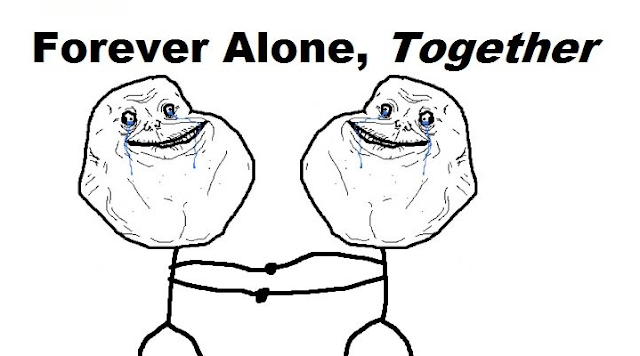 Yus, me and Kittie together for just over four weeks now, and as I am currently touching wood (not like that! Cheesus!) I do said things are going rather marvellously.  In fact, it almost surprises me that she hasn't gone running to the hills yet; it transpires that I have an awful lot of annoying habits which she points out both loudly and often.  One being that I fidget and waggle my feet when I'm in bed, two being that I - apparently - fiddle with my nipples a lot, and three being that me trimming my limited facial hair on the sofa is disgusting . . . and yet her trimming her toenails on my sofa and making all the clippings into some form of burial mound on my coffee table is allegedly socially acceptable.   But still, ain't she purdy?

Worse still is how I've managed to cram in a fair few biological faux-pas in the past few weeks (don't worry Gareth, you still have exclusive rights to your own new years 'celebration').  In chronological order;

1) She thought I was having an emo-rage over something or other because I hadn't text her for a while. Well, it had been a long day for me, walking around Derby doing something so productive and memorable that I forget the details, but I was listening to music on my BlackBerry via headphones.  As I was walking home, I became more and more aware that my bladder was rather full, and by the time I got to my door, I had to do the -desperately-needing-toilet-gallop-up-two-steps-at-a-time sprint.  Upon reaching the bathroom, I wrestled with my belt - earphones still in, BlackBerry in jeans pocket - and thought I deserved a good sit-down after a long days walking, to take the weight off my feet.  What I didn't foresee is that, with the lowering of my trousers, my BlackBerry was left dangling by the earphones, and as I sat down it . . . sort of hung in front of me and . . . . well . . . basically I pee'd on my BlackBerry and it completely broke.

2) 'Those' burgers.  After declaring that Mosh was awesome for quite some time (something Adam agrees with . . . I think) Tim decided to sample the finer points of Derby living and came along.  After a few drinks in the Bless, we headed to Mosh, and typically of Tim we left at 12:30.  As is tradition amongst me and Adam, we hit McDonna's.  This time, however, Kittie and I opted for a veggie burger each.  Now baring in mind we had only been together for one week at this point, we spent the next day severely leaking from a place only customs men bare to venture, and I was the same the day after that as well.  To such an extreme, was I unwell, that I actually managed to crap myself unconscious, which is very nearly worthy of going on my CV.  Kittie, bless her, shouted up the stairs after I'd been MIA for around forty minutes if I was okay . . . and got the groaned reply of;

3) A casual stroll through Nottingham. The two of us were holding hands, and because I'm just such a gent I was holding her jacket in my free arm. T'was at this very moment, in fact, whilst reflecting on just how much of a gent I am, that I had a-tinglin' in my nasal cavity, and instinctively raised my arm not holding Kittie's hand towards my nose . . . I basically used her coat as a massive handkerchief . . . twice . . . and then tittered like a Japanese school-girl about it for the next twenty minutes.

And yet she is still here!

Now, with m'dear Kittie being a keen reader of my blog, I realise that I've probably just made her question quite why she is with me, but because she likes my blog, I had to do something pretty bloody awesome in order to ask her out (since she obviously read about the gummi-bear thing with Melissa.)  I sort of shot myself in the foot Shy Ronnie-style with my own awesome-ness, because I had to top the sifting of the gummi-bears.

Now, along with a mutual love of Flight of the Conchords, Red Dwarf, Studio Ghibli, Backyard Babies, Game of Thrones, The Walking Dead, and Supernatural (and a hatred of Jessie J and Forrest Gump) me and Kittie are keen Pokemon connoisseurs; we regularly bitch about how pathetic Ash Ketchum is, and hotly debate who is stronger in between Poliwrath (my favourite) and Lucario (her favourite).  We sit playing pokemon together too, because we are just that cool.

So, here is how I asked Kittie to be my girlfriend. 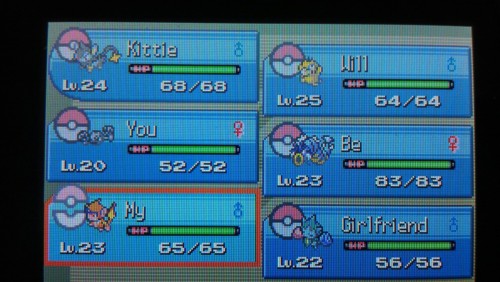 Silk isn't a sir name.  It's a lifestyle.


Shortly after this, we had a battle, and there was much hilarity when she beat my Roselia and it came up with a message on her Nintendo DS that "the foes Girlfriend has fainted"

Kilroy
I hope to one day make a living from writing, and a close friend suggested I dip my toe into the whole blogging thing . . .meh, here goes! What, you want more? Okay, erm, I caught Mewtwo without using the masterball . . . does that count?